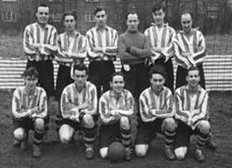 The club was formed in 1946 when a group of ex-servicemen decided that the town could support two football clubs. The first meeting to form the club was held in the local Anchor Public House on the bank of the River Thames. The new club joined Division 1 of the North Berks League for the 1946/47 season and whilst being relegated, they went on to win the league's Charity Shield at their 1st attempt.

In 1953/54 the club were North Berks champions and were also cup finalists. However, it had set its sights on higher things and five years later entered Division 1 of the Hellenic League. During the 1965/66 season, they won the Division One Challenge Cup, and the following season were the cup finalists.

Following promotion to the Premier Division in 1976/77, the club struggled and was relegated to Division One after four seasons. With a more ambitious approach, the club bounced straight back into the Premier League where it remained for 24 straight seasons, winning the Division One Cup in the same promotion year. Senior status followed in 1985 allowing the club to be eligible for entry into the F.A. Vase, County Senior Cup and in 1989 the F.A. Cup.

The 50th Anniversary and the most successful season of the club to date was during the 1996/97 season, which saw AUFC win the Berks and Bucks Senior Trophy, Hellenic Floodlit Cup, and finishing Runners Up in the Hellenic Premier Division. Away for the pitch the club improved its catering facilities, added a function room, a covered stand and ground floodlighting to support its now capacity of 2,000 people

The 2006/07 season saw the club gain promotion to the Southern League, whilst again improving its facilities by adding new changing rooms, turnstiles, and a 150-seater stand.

The next 7 seasons saw Abingdon United FC compete in the Southern League, but with increasing financial pressures, the club volunteered to return to the Hellenic League Premier Division for the 2013/2014 season.

The club currently play in Uhlsport Hellenic League Division One.